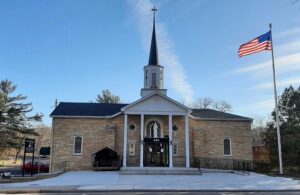 The first service in Taylors Falls Catholic Church was conducted by Father Murray of Stillwater. He traveled to Taylors Falls by steamboat in 1868. The congregation, consisting of a half a dozen families, met in a private home. Father Murray continued his services until his passing in 1870. The few members of the church were far apart. They came by foot, ox team and by horse drawn vehicles. Father Murphy, Father Cipher of Hudson and Father Chrisostem of St. Paul, faithfully traveled to Taylors Falls those early years to serve their congregation. It was remarkable, quotes Father Gibson in 1814, how their unselfish labors sustained the church in those trying times. After the Civil War there was a depression. Money was scarce, but their faith was real when they built their first church. Naturally, the cost of the first church was not great. Anton Beyer donated the lots, situated on the hill about three blocks west of its present location. Henry Thone donated a yoke of oxen to pay the carpenters. Father Stemper built the first pews. The first Mass was read by Father Wilkes in 1877. One of the first trustees was Patrick Fox. The first wedding was Mr. Rochel and Miss Terriell of Panola, in 1892. The second wedding was John Hurley and Miss Josephine Schlosslin of Wolf Creek, Nov. 13, 1895. By 1914 the congregation had enlarged to 20 adults and 35 children served by Father Gibbons of Forest Lake.

The church building was moved down the hill to its present location in 1950, enlarged, and made more beautiful over the years. The priest now lives next door, closer to the river. Father Albert J. Shanley served at St. Joseph and St. Francis Xavier for 40 years.  He passed away at the age of 93 on March 18, 2007.

The parish was established in 1884 through the generosity and determination of John Peter Greene and wife, Marie (Mary) Hoppe, who deeded the property to the Archdiocese of St. Paul in May 1884. Henry Rochel and wife, Antoinette Hoppe, Bernard Thomskemper and wife, Addie Hoppe, along with the Greene’s, were all very instrumental in raising funds for the original chapel, which remains standing on the site. Henry Rochel was the first person to be buried in the family cemetery on September 13th, 1884. Starting with 10 families back then, St. Francis Xavier now has over 100 families.

Fr. John Drees began as the parochial administrator to both St. Francis Xavier and St. Joseph on July 1, 2017. Fr. Drees was installed as the Pastor of both parishes on July 9, 2020.

Fr. Bodin was born February 19, 1970, in Watertown, MN to David and Judy Bodin. He began his seminary studies at St. John Vianney College Seminary and the University of St. Thomas in the fall of 1997. After graduating in 2001, he continued his seminary formation at the St. Paul Seminary. He was ordained a priest for the Archdiocese of St. Paul and Minneapolis on May 28, 2005. Father Bodin served his first assignment at the Church of St. John Neumann in Eagan, MN and was named pastor of St. Joseph and St. Francis Xavier on February 1, 2008. He served the parishes until July 1, 2011, when he was asked by Archbishop John C. Nienstedt to study canon law at Catholic University of America in Washington, DC.

Fr. Shanley was born January 2nd, 1914 in New Haven, CT to Albert J. and Agnes Shanley. He was ordained into the priesthood on December 17, 1938 at the Basilica of St. John Lateran in Rome. He served as a chaplain for the US Army during WWII. He served as parish priest of St. Joseph and St. Francis Xavier Parishes for 40 years. He enjoyed reading, was a master gardener and an artist.

Fr. Shanley, the beloved pastor of St. Joseph and St. Francis parishes, passed away at Good Samaritan on March 18, 2007 at the age of 93. A Mass of Christian Burial was celebrated on Wednesday March 21, 2007 at St. Joseph Catholic Church in Taylors Falls, MN. Officiating Clergy were Father Kevin McDonough, Father Joel Cycenas, and Father Brian O’Neill. Interment was in St. Francis Xavier Cemetery in Franconia Township.

To get a hold of a priest in a pastoral emergency.